Good News in the Psalms 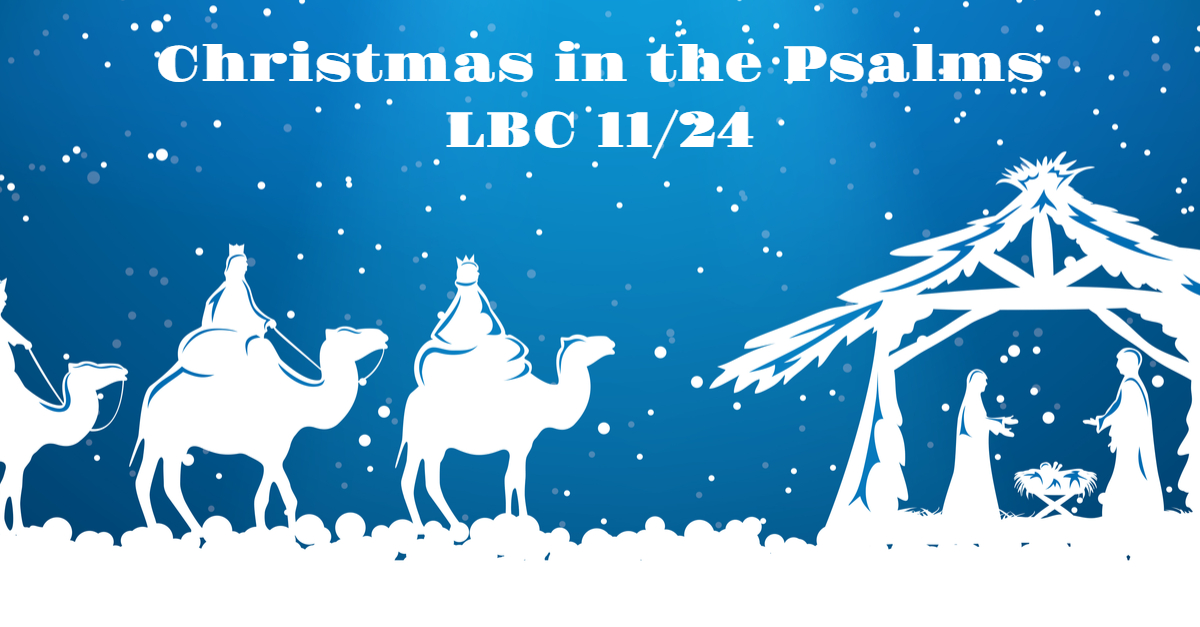 Luke gives us some penetrating detail about the Lord's birth. There is a layered contrast between the first 8 verses in the gospel of Luke and the rest of the New Testament. A contrast that is, on the face of it, worth pondering. Those who heard the good news that day were waiting for this news.

“In those days a decree went out from Caesar Augustus that all the world should be registered. This was the first registration when Quirinius was governor of Syria. And all went to be registered, each to his own town. And Joseph also went up from Galilee, from the town of Nazareth, to Judea, to the city of David, which is called Bethlehem, because he was of the house and lineage of David, to be registered with Mary, his betrothed, who was with child. And while they were there, the time came for her to give birth. And she gave birth to her firstborn son and wrapped him in swaddling cloths and laid him in a manger, because there was no place for them in the inn.

And in the same region there were shepherds out in the field, keeping watch over their flock by night.”

This was a rough time to be Jewish and they were languishing under Roman occupation...in particular, for shepherds.

Quirinius was appointed Legate of Syria, with instructions to assess Iudea Province for taxation purposes. One of his first duties was to carry out a census as part of this order. For the Israelites, this was a bitter reminder of all that had been lost as a nation.

Shepherds lived under Roman rule in air tight caste system where poverty was ensured. Where bondage to the Romans was most keenly felt and life was hard and short.

Living conditions were rough. They lived close to the land, eking out a living from the earth’s seasonal produce. Most dwelt in small huts, tended a few animals, and had only the barest provisions. Malnutrition was common. Infant mortality was rampant.

Living within a domineering caste system, they were oppressed, poor, sick, and had no access to education or upward mobility. This gives us some depth to what Jesus said in Mark 6:34:

"Therefore don't worry about tomorrow, because tomorrow will worry about itself. Each day has enough trouble of its own." Literally, tomorrow has enough "evil, damaging, terrifying" circumstances of its own. Life was languishing.

The shepherds in the field understood what the prophet Habakkuk said in chapter 1:2-4:

How long, O Lord, will I call for help,

And You will not hear?

Yet You do not save.

Why do You make me see iniquity,

And cause me to look on wickedness?

Yes, destruction and violence are before me;

Therefore the law is ignored

And justice is never upheld.

For the wicked surround the righteous;

The shepherds were the living examples of Israel, "who morns in exile there."

But that night, there was an announcement that changed everything. That night, the long awaited hope found in the Psalms became a reality:

“And an angel of the Lord appeared to them, and the glory of the Lord shone around them, and they were filled with fear. And the angel said to them, “Fear not, for behold, I bring you good news of great joy that will be for all the people. For unto you is born this day in the city of David a Savior, who is Christ the Lord. And this will be a sign for you: you will find a baby wrapped in swaddling cloths and lying in a manger.” And suddenly there was with the angel a multitude of the heavenly host praising God and saying,

“Glory to God in the highest, and on earth peace among those with whom he is pleased!””

The angel brought them GREAT NEWS OF EXCEEDING JOY for all the people! And in that announcement the trajectory of the New Testament, more importantly, the lives of people changed forever. THEY WERE FILLED WITH GREAT JOY.

Day to day life was harder, more treacherous, more difficult. But the NEWS filled the hearers with joy because they knew what the Psalms taught.

The angel's announcement brought a stunning change: "Unto you is born this day in the city of David a Savior, who is Chris the Lord."

This statement is loaded and wasn't unexpected. For hundreds of years, generation after generation, the Israelites were living and anticipating Christmas through the Psalms that told them all about this descendant of David...the Savior...the Christ...the Lord.

The Psalms taught them...prepared them.

The Levites sang the Psalms in the ancient Temple. Generations memorized them. They looked to them for the hope of the nations. They meditated on them day and night. And at the right time, when the joy and hope of the Psalms came to fruition, the entire course of history change and joy filled those shepherds that night.

Knowing the depth of the good news as outlined in the Psalms produced a joy that has echoed through out history!

Join us this Sunday as we begin our Christmas series, Christmas in the Psalms!

SERVANTHOOD and the Good News In Everyday Life

The High Calling and Supreme Joy of Family